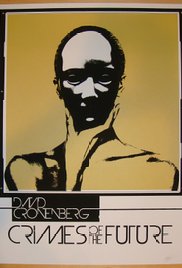 Crimes of the Future details the wanderings of Tripod (Mlodzik), sometime director of a dermatological clinic called the House of Skin, who is searching for his mentor, the mad dermatologist Antoine Rouge. Rouge has disappeared following a catastrophic plague resulting from cosmetic products, which has killed the entire population of sexually mature women.

If you don't know what 'Body Horror' is then watch a couple of Cronenberg's films and you'll start to get a pretty visceral sense (no pun intended). Our question, would he actually enjoy getting a gruesome degenerative illness?