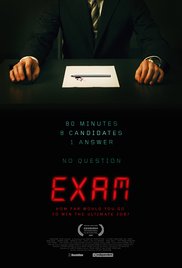 The final eight candidates for a highly desirable corporate job are locked together in an exam room and given a test with one question. It seems simple yet confusing that soon, tensions begin to unravel.

Have you ever heard the name Philip Zimbardo? What about Stanley Milgram? If so, you might be interested in the outcomes of these films which take famous psychological experiments and principles as their jumping off points.