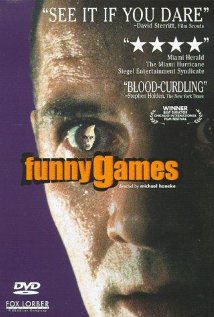 Two psychotic young men take a mother, father, and son hostage in their vacation cabin and force them to play sadistic "games" with one another for their own amusement.

Hear that knock on your door? You better hope it's not one of the highly intrusive villains from this collection of home invasion horror/thrillers, including 'The Strangers', 'Straw Dogs' (both original and remake), and British hidden-gem 'Cherry Tree Lane'!

Efforts from the Italians, French, Japanese, Spanish, and many more, make up this truly diverse collection of classic foreign-language horror films. Go on, pat yourself on the back and feel cultured as you enjoy helpless victims of all colors and creeds meet their gory, totally undeserved, deaths!

Don't look for buckets of blood and axe wielding maniacs here (at least not exclusively). These classic psychological horror movies released before the year 1990 rely more on the unseen than the seen for their impact. Also check out our 'Modern Psychological Horror' collection for more recent fare!

What is evil? The question has haunted theologians for millennia, but seems to make modern people uncomfortable. This eclectic collection of films eschews cartoonish tropes, delving into the real nature of evil as a psychological, spiritual, and social phenomenon.