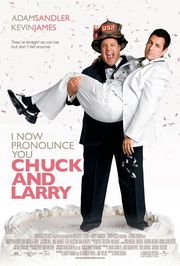 If Judd Apatow's brilliant 'Knocked Up' doesn't float your boat why not add a bit of sparkle to your life with 'Hairspray'! Doesn't feel like ten years ago does it!

Movies Like I Now Pronounce You Chuck and Larry: 'Faking It' Comedy Movies

Faking attraction to the same sex makes for some iffy hijinks in these movie.