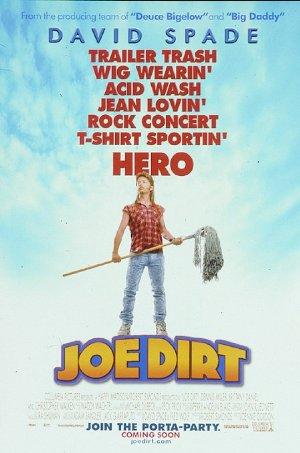 After being abandoned by his parents at the Grand Canyon, Joe Dirt tells the story of his journey to find his parents.

These contemporary goofy slapsticks carry on Mo, Larry, and Curly's esteemed legacy of physical comedy, sight-gags, and potty humor. Who knew there were so many surfaces upon which a man could land spread-eagle?

Modern comedies in the vein of Anchorman: highly entertaining characters with low IQs get themselves into a variety of scrapes, which they somehow always escape with the help of friends, luck, and their own native charm. Make sure to check out 'Alan Partridge' for the British Ron Burgundy!

Movies in the vein of 'Mall Cop' and 'Joe Dirt', following uber-losers on their path to unexpected glory. It just goes to show, it's not what's on your resume that counts - it's what's in your heart.

Some people find David Spade annoying, weedy, a smart-ass, high-pitched, aggravatingly short.. Wait we lost our train of thought. These are all movies David Spade is in.

'Movies Like The Hot Chick': Comedy in the Sandler School

How to define Sandler's unique comedic style? Goofy, warm, relatable, gruff? These films take the Sandman's aesthetic and run with it - for some similarly light-hearted and consistently entertaining results.

Hillbillies, trailer-park layabouts, and Billy Bob Thornton - lots and lots of Billy Bob Thornton - compose the protagonists of this collection of these trailer park comedies, which usually maintain a good heart even as they satirize. Hey, did you hear there's going to be a new 'Joe Dirt'?